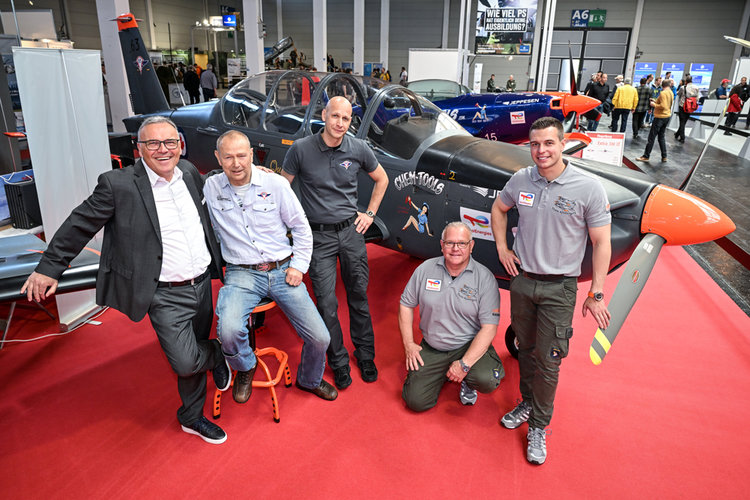 During the pioneers' days of aviation, the new way of travelling stood for international understanding. This still holds true today. After all, flying also connects generations, something proven impressively this year by four special AERO guests.

We're talking about Toni and Walter Eichhorn as well as Nico and Ralf Niebergall. Every time just one of these names appears in the schedule of an aviation event, the audience is at the ready. In the general aviation scene, both father and son Eichhorn and the Niebergalls are well-known for spectacular shows. The youngest of the four, Nico, is just 27 years old, so he has only had his pilot's licence for a decade. He practically inherited his father Ralf's passion for flying, who had already flown in 1987 – long before Nico was born. His father Kurt, Nico's grandad, had also been a private pilot for more than 40 years.

Therefore, it's no surprise that Nico had taken to flying as a 12-year-old – initially with model flights, quite age-appropriate. While his father Ralf sat in a Siai Marchetti SF 260 cutting capers in the sky, son Nico did this from the ground. He accompanied his father's tricks in close formation flight, with his hands on the remote control, flying the same plane as his father but as a one-to-three-scale model version. Until well into last year, the two were the only pilots in Europe to make their mark internationally in formation aerobatics with a "proper" plane and its true-to-scale model. The fact that they gave their farewell show last September on the other side of Lake Constance in Lommis, Switzerland, has a delightful reason. Nico and Ralf finally realised their dream of jointly flying formation aerobatics in "proper" planes in June 2021. Before that, they had long searched for a second SF 260, which is not very common. In 2012, they finally found a cheap Siai Marchetti – cheap, because it was completely dismantled and packed in boxes. Nine tough years of reconstruction were to follow. In early summer least year, Nico, who had meanwhile also found a profession in aviation as an aircraft mechanic, was finally able to complete this work successfully. He had already practised for several years how to fly a plane like this newly restored one, in his father Ralf's model.

Toni and Walter Eichhorn are also passionate about formation aerobatics – for more than a quarter of a century! Father Walter discovered his passion for flying at an early age, which led him to work as an airline pilot for Lufthansa. He not only flew modern airliners, though. Also many historical samples adorn his flying career, including the Junkers JU 52, which he flew for a total of 15 years. Or the dreaded fighter jet of the German Luftwaffe during World War II, a Messerschmidt Me 109 Bf, which he presented for the cinema cameras in the Hollywood movie "Operation Walküre", with Tom Cruise in the lead character of would-be Hitler assassin Claus Schenk Graf von Stauffenberg in the air.

So his son Toni also imbibed the passion for flying from a very young age. He not only became a professional pilot like his father, but was also interested in aerobatics in historical aircraft – just like the Niebergalls: always in close formation. Until today, the Eichhorns have collected more than 40,000 flight hours together in their flight logbooks. For three of the 26 years alone, the two presented their skills in two extras. The planes built in North Rhine-Westphalia are among the best on the international market for aerobatic aircraft. For much longer, however, they used two North American T6, American fighter jets from World War II. After 45 years of experience in the cockpit of this aircraft, Walter Eichhorn, meanwhile 85 years old, finally handed over his T6 to the Salzburg "Flying Bulls" at the beginning of last year. It's now in good hands. He's not abstaining from aerobatics yet, though. While son Toni now has a French military trainer, a TB-30 "Epsilon", father Walter has returned to the Extra. He still loops the skies with it at German airshows. And, as the internationally elected Flying Legend adds, he will not look for another hobby until he gets old.

Four aerobatic pilots from two generations who have written aviation history: The stars of the airshow community meet at AERO. With over 60 years of flight experience, Walter Eichhorn has numerous contacts in the international aviation community. The AERO show plays a central role: "At AERO, you find everything that has to do with flying. In the past, we even showcased our machines, today we present them directly at our booth. This is where people from all over the aviation community come together: I meet people at the AERO whom I haven't seen for years, that's great."