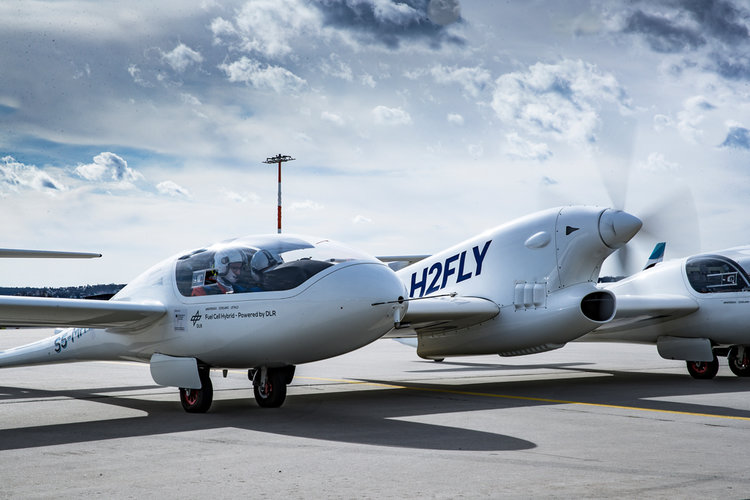 all copyrights are reserved by maks richter

Today H2FLY, the Stuttgart-based developer of hydrogen fuel cell technologies for aircraft, announced that its demonstrator aircraft, the HY4, set what is believed to be a new world record last week for hydrogen-powered passenger aircraft, flying at an altitude of 7,230 feet and confirming the company's position as one of the leading companies in this new sector.

The news comes as the company also flew a 77-mile journey between Stuttgart and Friedrichshafen on April 12th, marking the first time a hydrogen-electric passenger aircraft has been piloted, between two major airports.

Commenting Prof. Dr. Josef Kallo, co-founder and CEO of H2FLY said "This is a remarkable achievement for H2FLY, as no other hydrogen-powered passenger aircraft has flown between two commercial airports to date. We are also thrilled to have set what we believe to be a new world record by reaching an altitude of over 7,000 feet with our HY4 aircraft. We want to thank our long-time partners Stuttgart Airport, University of Ulm, DLR Stuttgart, Friedrichshafen Airport, and AERO Friedrichshafen, for supporting us in our mission to make sustainable travel a reality."

The aircraft flew the mission to Friedrichshafen in order to participate in the AERO Friedrichshafen airshow, taking place from April 27th. The HY4 will be presented to the general public for the first time and will be exhibited until the end of April. Up to now, testing of the HY4 has taken place exclusively in the test area around Stuttgart Airport. Stuttgart Airport is a long-term partner of H2FLY and plays a key role in supporting the company with its infrastructure.

Walter Schoefer, Speaker of the Board of Flughafen Stuttgart GmbH concluded: "We are delighted that HY4 has achieved this next technical milestone. This is another step on the long road of the aviation transformation process towards a more climate-friendly air transport. We see hydrogen-electric engines as the key to zero-emission flying and have therefore been promoting the HY4 project for many years. As a ‘fairport’, we want to continue to be a pioneer and enabler for the next steps when it comes to sustainability.”

Claus-Dieter Wehr, Managing Director of Friedrichshafen Airport commented: "In the airport's more than one-hundred-year history, this is the first time a hydrogen-powered aircraft has landed here in Friedrichshafen. We are very pleased that we can thus play our part in the further development and testing of hydrogen-electric propulsion. Particularly in view of the numerous projects on sustainable mobility in aviation, I see great opportunities for the Friedrichshafen site to create the framework conditions for innovative aviation companies and to attract them here.”

The four-seat HY4 has successfully demonstrated the applicability of hydrogen-electric propulsion solutions in aviation during several flight campaigns and with more than 90 takeoffs. It also serves as a test platform to further develop the propulsion system and thus lay the foundation for development work on a hydrogen-electric-powered, 40-seat Dornier 328, which will be developed jointly with Deutsche Aircraft by 2025.

"Sustainable aviation is the central topic at this year's AERO Friedrichshafen. We are, therefore, really pleased that Prof. Dr. Kallo and his team from H2FLY are celebrating a trade show world premiere at AERO Friedrichshafen with the HY4 hydrogen-electric aircraft. For more than ten years, we have been showcasing innovations from the field of electric aviation as part of the e-flight-expo. With the AERO Sustainable Aviation Trail, we are illustrating how innovative the entire general aviation sector and this year's AERO are with over 75 registered exhibitors on this sustainability trail in 11 exhibition halls," enthuse Head of AERO Roland Bosch and Show Director Tobias Bretzel of AERO Friedrichshafen.

Sustainability in aviation also plays a significant role for Friedrichshafen Airport and this year's AERO, one of the world's most important aviation trade shows with more than 600 exhibitors from 35 nations. H2FLY will be represented at the air show from April 27 to 30 with its booth and the HY4 in Hall A7. In addition, H2FLY co-founder and CEO Prof. Dr. Josef Kallo will hold the presentation "Powered by Hydrogen H2FLY - Emission-Free Flying" as a featured speaker at the "IASA Conference - GREENER SKIES AHEAD The Future of Regional Aviation Pioneering Sustainable Air Transport" on April 27 from 11:00 a.m. CET.

Founded in 2015 by five engineers from the German Aerospace Center in Stuttgart and the University of Ulm, H2FLY GmbH is working to deliver to market the first qualified, fully hydrogen-electric aircraft powertrain. By bringing hydrogen fuel cell technology to the next level, H2FLY will unlock the era of emission-free, sustainable air travel. The company develops hydrogen-electric propulsion systems for aircraft and is a global leader in the development and testing of such systems. The HY4, the world’s first hydrogen-electric passenger aircraft, took off in 2016, demonstrating both the feasibility and potential of this technology for the aviation of the future. H2FLY has a powerful network of partners in industry and science, and is currently working to scale up its technology with the aid of German and European funding. In just a few years, hydrogen-electric aircraft will be able to transport 40 passengers over distances of up to 2,000 kilometres (1,240 miles). H2FLY successfully closed a major funding round in April 2021, securing its growth and enabling the company to begin scaling its technology and solving the related challenges.